If ever a destination deserved the title of ‘last wild corner’ of Africa, then Zambia’s Liuwa Plain National Park would be a strong contender.

Part of the Zambezi River basin, Liuwa Plain is hundreds of square miles of flat grassland punctuated by tree islands and marshy pans. Wild and remote, the area is a favourite with seasoned safari travellers for its astonishing wildlife secret: Liuwa is home to Africa’s biggest wildebeest migration after the Serengeti/Masai Mara.

The Liuwa grasslands are at their most dramatic in November and December. Encouraged out of the surrounding woodland by newly-fallen rain and fresh grazing, wildebeest move onto the open plains in their thousands, accompanied by zebra and tsessebe antelope. These animals drop their young at this time, attracting predators. The spotted hyena, in clans of up to 50 individuals, is the apex predator at Liuwa but lion and leopard hunt on the grasslands as do cheetahs and wild dogs.

Heavy rain between January and April make the park largely inaccessible and safari operations close down. Lodges reopen in May as the water recedes and game viewing is increasingly rewarding as the dry season continues into September and October. Bird watching is excellent all year round but especially so in November and December.

Accommodation in Liuwa Plain National Park is limited to a handful of bush camps and safari lodges that typically operate between May and December. Our recommended camps are run by legendary Zambian safari operators Robin Pope and Norman Carr and offer a mix of day and night game drives as well as guided walks.

Accessible from Lusaka International Airport, Liuwa Plain is usually experienced as part of a longer safari itinerary. Using Lusaka as a travel hub, you can combine a Liuwa Plain safari with Victoria Falls and Zambia’s other reserves – the South Luangwa, Kafue and Lower Zambezi national parks. It is also relatively easy to add Botswana’s Chobe National Park.

Talk to Safari Online about a Liuwa Plain safari – we’ll recommend a tour based on your interests and requirements and will take care of all the organisation for you. We can also add on destinations such as Lake Malawi and South Africa, ensuring your Liuwa safari is part of an unforgettable holiday.

Talk to Us about a Liuwa Plain safari Enquire Now

ACTIVITIES TO LOOK FORWARD TO 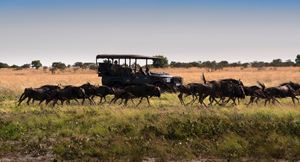 The arrival of thousands of wildebeest on the Liuwa Plains in November & December ranks as one of Africa’s greatest migrations. With predators swooping in, it is a time of survival for the herds: put yourself in front-row seats & watch the drama unfold in front of you. 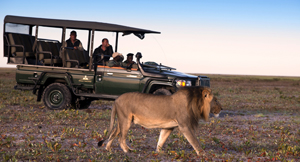 The spotted hyena is Liuwa’s most common predator but lion, cheetah & wild dog are all increasing in numbers & are seen most regularly during the wildebeest migration. Liuwa is also home to leopard as well as smaller predators like serval cat & honey badger. 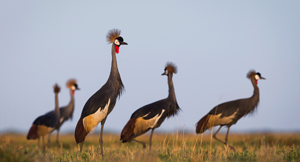 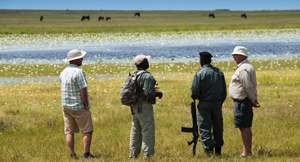 With long-established walking safari operators Robin Pope & Norman Carr managing our recommended lodges, it’s no surprise to learn that you can lace up your boots & enjoy exciting walking safaris in the park with some of the best guides in the business. 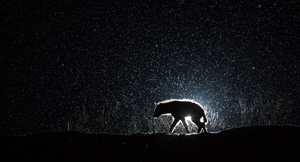 Many smaller animals prefer the safety of the night to emerge: a spot-lit night drive is your chance to see creatures such as porcupines & side-striped jackals. You’ll also enjoy unfettered views of the crystal-clear night skies & a guide who leads you through the cosmos. 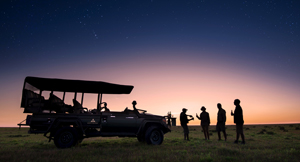 Talk to Us about a Liuwa Plains Safari

Lorraine (UK)
It was a safari of a lifetime and exceeded all of our expectations!

Roger (UK)
Safari Online were extremely efficient and absolutely charming to work with.

Ann and Mario (Canada)
Best trip I have ever been on. Highly recommend.

Penni (AU)
Karina was absolutely instrumental to our safari success.

Chris (USA)
Professional, patient, efficient and responsive. Met all our travel needs and requirements spot on