It's The Migration River Crossing Season

It is early July in the northern Serengeti and the first few wildebeest are arriving at the banks of the Mara and Grumeti Rivers. More wildebeest quickly pile up behind them, shuffling nervously and peering closely at the murky brown water. None of them enters the river yet.

Having eaten their way across the Serengeti after the calving season, the migrating wildebeest herds now need to cross these rivers for fresh grazing in the Masai Mara. But every animal knows the rivers are home to one of Africa’s largest and most feared predators – the Nile crocodile.

Eventually, the pressure is too much and the wildebeest begin to cross the rivers in panicky groups, almost instantly triggering the appearance of giant, open-jawed crocodiles. The resulting scenes may not be for sensitive viewers but, as part of the Great Migration, the river crossing season offers a wildlife experience second to none and the opportunities for photography are excellent.

As well as the drama in the water, the event attracts scavengers – vultures, marabou storks, and hyenas – and it’s not as if it’s just crocodiles the wildebeest have to worry about. Lions and cheetahs wait patiently on the other side of the rivers as do roaming packs of African wild dogs.

The timing of the migration river crossings is hard to predict – it varies from year to year depending on local conditions but it’s safe to say that the wildebeest begin crossing sometime in July with the greatest numbers during August. The river crossings continue into September and tail off towards the end of the month as the wildebeest fan out across the Masai Mara, gathering their strength before beginning the migratory cycle again.

As for where to see the river crossings, you have a choice of two destinations: Kenya’s Masai Mara Reserve and Tanzania’s northern Serengeti which includes the private Grumeti reserves. There are several rivers that run through the region and have to be crossed by the migrating herds – the two most famous are the Mara River and the Grumeti River – and the drama can be equally enjoyed from either side of the river.

Our Most Frequently Asked Questions about the Migration River Crossings 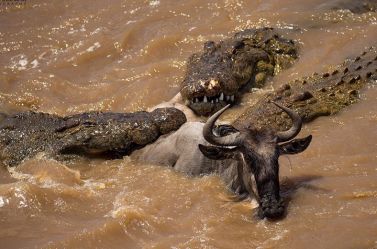 When Should I Book for the River Crossing Season?

It’s the most important question: the river crossings are the Great Migration’s most sought-after event. If you are looking for the best experience and have specific dates in mind, then we advise booking a year in advance – longer if you have a group and would like to secure several rooms at a small camp. The bigger the group, the more in advance you’ll need to make the booking – a year and a half is not an exaggeration!

However, if you are flexible with dates and don’t have any specific accommodation in mind, then we suggest booking around six months in advance.

Where Should I Stay & For How Long?

There are well-located camps and lodges in both the northern Serengeti and the Masai Mara, including semi-permanent tented camps set up specifically for the river crossing season. We suggest a minimum of three nights at a camp to gain the most out of the experience – it is pretty much a once-in-a-lifetime trip for most people – but another popular combination is two nights at a river-crossing camp and then two nights at a private Mara Conservancy for a different wildlife focus and far fewer other visitors. 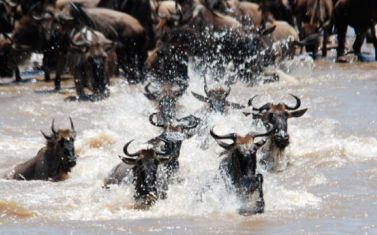 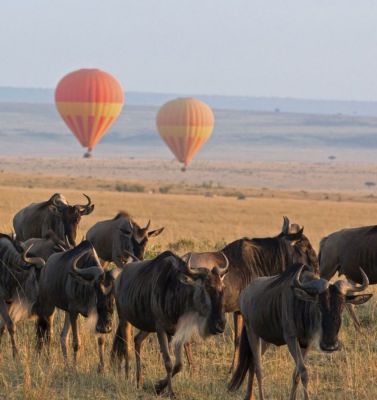 What Activities will I Do?

Guided morning and afternoon game drives are the main activities during the river crossing season. You leave camp early in the morning, returning in the late morning and then head out again in the afternoon. Accommodation located in the privately-managed conservancies adjoining the Masai Mara or in the exclusive Grumeti Reserves can offer their guests walking safaris too, and their guides can drive off-road for exceptional sightings and use a spotlight on the evening drive home to look for nocturnal creatures.

Hot-air ballooning is a popular activity offered at several camps and lodges during river crossing season; it is an early start but the reward is sunrise over the savannah from a thousand feet up and a champagne breakfast on landing.

There are opportunities to experience a little local culture too. Most camps and lodges offer a guided tour to a Maasai village where you can learn about their customs and traditions and perhaps watch – or even join in – a traditional Maasai ‘jumping dance’.

Where Else Should I Go during the River Crossing Season?

The July through September river crossing season coincides with the best time to go on safari in Kenya and Tanzania as well as destinations across southern Africa – the Kruger Park, Botswana and Zambia for example. We especially like Tarangire National Park and the Ngorongoro Crater– they both deliver a different game viewing experience.

Also recommended at this time of year are Kenya’s Indian Ocean beaches and the Seychelles. It’s one of the mildest and driest times on the tropical Kenyan coast, while in the Seychelles you will have missed its two hottest and its two wettest months.

Browse our recommended tours below, each featuring a wildebeest migration safaris in East Africa. If you’d like us to tailor-make an itinerary based on your needs and budget, then simply contact us and we’ll be happy to help. Or take a look at all Tanzania Safaris. 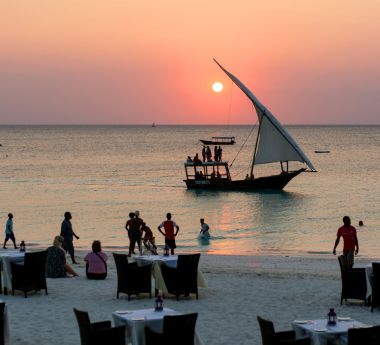 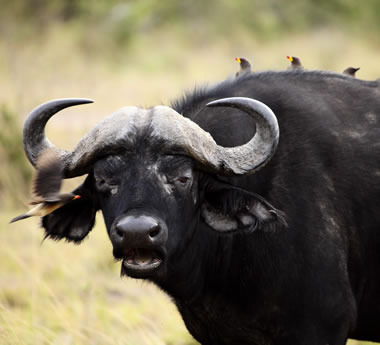 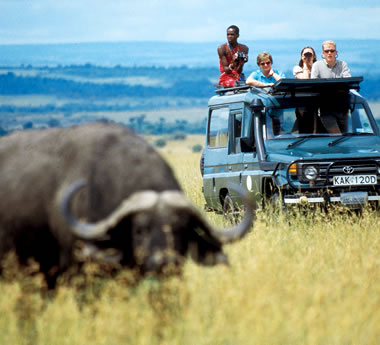 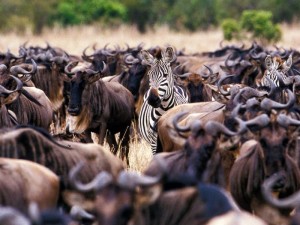 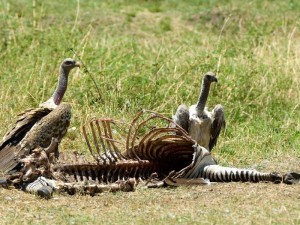 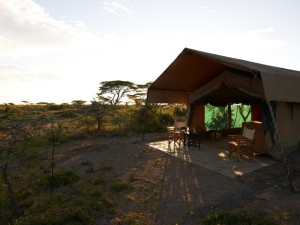 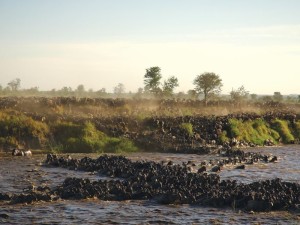 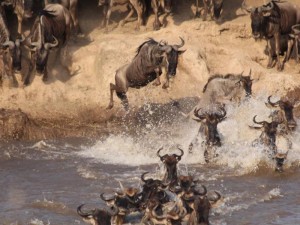 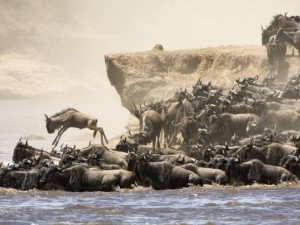 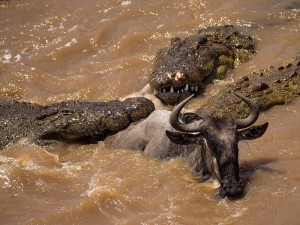 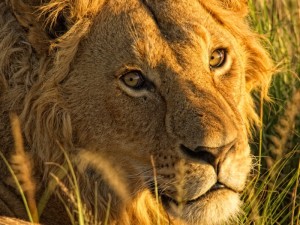 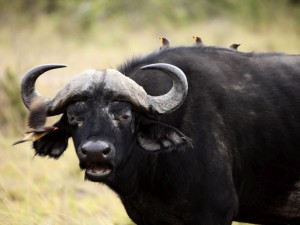 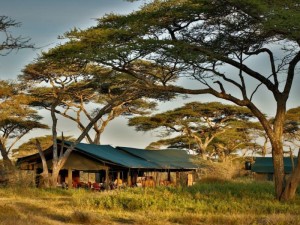 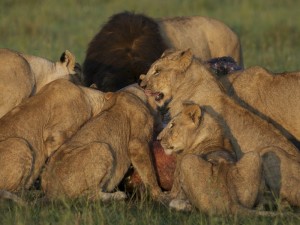 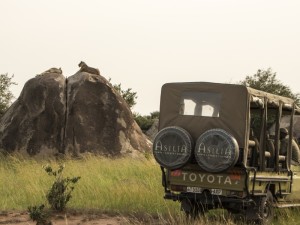 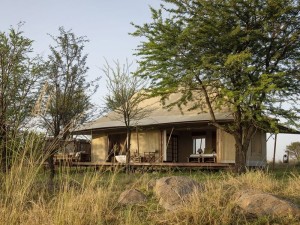 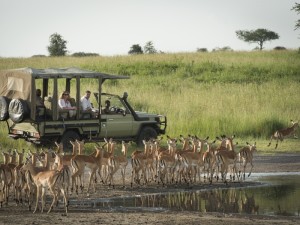 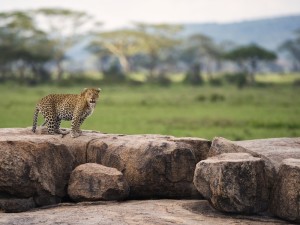 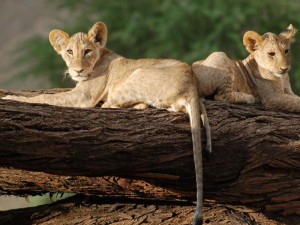 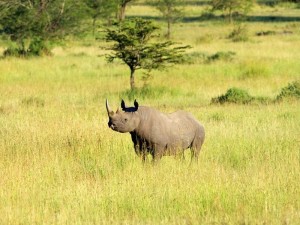 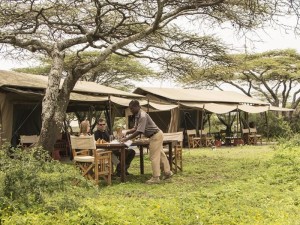 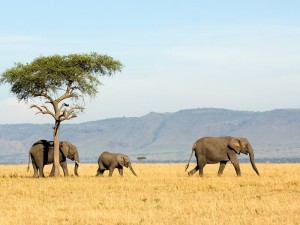 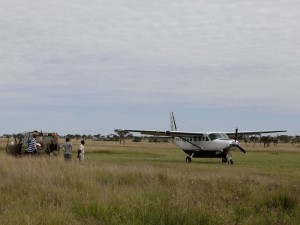 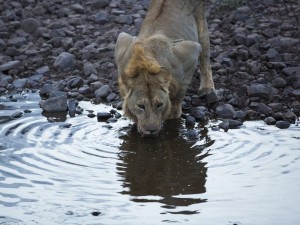 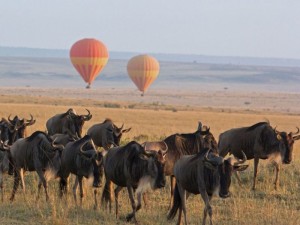 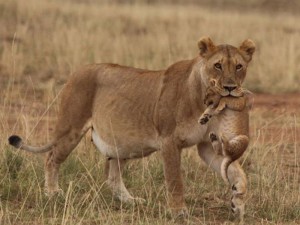 The Migration river crossing season offers a wildlife experience second to none and the opportunities for photography are excellent.
Enquire Now

Penni (AU)
Safari Online were extremely efficient and absolutely charming to work with.

Lukas (Germany)
It was a safari of a lifetime and exceeded all of our expectations!

Roger (UK)
Professional, patient, efficient and responsive. Met all our travel needs and requirements spot on

Neena
Karina was absolutely instrumental to our safari success.